Synthetic resin molds obtained from a true Fossil. Scale 1: 1. Color as the original.
The photograph is only indicative, the object sent may vary slightly because each casting may, although minimally, be different.

To receive a quote, please complete the form, indicating the item code of each article you wish to purchase. You will receive an answer with all the necessary information within 24/48 hours.

NEW – all the molds are also available in SYNTHETIC RESIN
The latest-generation synthetic resin used is completely non-toxic, with a very high definition, without any linear shrinkage and is characterized by a very high hardness and greater compactness than any alabaster plaster or ceramic plaster. They can also be decorated with any type of color or paint (synthetic, acrylic, solvent or water) and also treated with a galvanic bath.
The models made of synthetic resin, as well as those in plaster, adapt exclusively to indoor applications.

Class: Cephalopoda
Order: Ammonitida
Family: Perisphinctidae
Genus: Perisphinctes
Species: Perisphinctes sp.
Origin: Madagascar
Perisphinctes is an extinct cephalopod mollusc belonging to the ammonites. He lived in the Upper Jurassic (172-149 million years ago), and his fossil remains are found on all continents. The aspect of the shell of this ammonite is quite conventional: planispiral (wrapped in a flat spiral), symmetrical, serpenticona (in the shape of a coiled snake, with poor covering of the turns). At each growth stage, the shell has a sub-square section with rounded edges; the navel is very broad but not very deep. The ornamentation is made up of a number of sharp and slightly protruded ribs (arched forward, ie in the direction of the opening). Near the abdomen, the coasts are forking, crossing the ventral region without interruption. 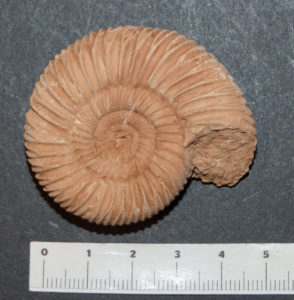 Class: Trilobita
Order: Ptychopariida
Family: Alokistocaridae
Genus: Elrathia
Species: E. kingii
Origin: USA
Elratia (Gen. Elrathia) is an extinct arthropod belonging to the trilobites. He lived in the middle Cambrian (about 505 million years ago) and his fossilized remains were found exclusively in North America. The cephalic shield of this trilobite was relatively small compared to the thorax; the central part (glabella) was small and shaped like a bud, while the eyes were central and there were two structures on either side of the cephalon (genital spines). The thorax consisted of 13 segments, with a narrow axis and enlarged and slightly pointed lateral parts. The terminal part of the body (pigidium) was short. In total the body did not exceed the average length of two centimeters. 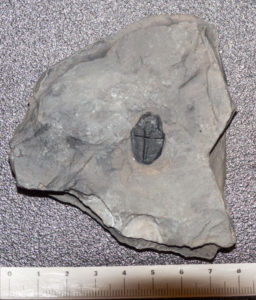 Class: Trilobita
Ordier: Phacopida
Family: Phacopidae
Genus: Phacops
Species: P. rana
Origin: Morocco
The facope (Gen. Phacops) is an extinct arthropod belonging to the trilobites. Its fossils are very common in most of the world, and are found in soils from the Silurian to the Devonian (430-360 million years ago). This animal was one of the most typical and widespread trilobites. The body was oval in shape, with a large head (cephalon) and a small posterior part (pygidium). The central region of the head (glabella) was large and posteriorly narrow, adorned with numerous large granules that covered the entire surface. The eyes, often well preserved in fossils, are very large. At the hypostoma (a ventral plate placed near the mouth) two uniramated antennae originated. The characteristic “three lobes” typical of the entire class were of very similar dimensions and well rounded. 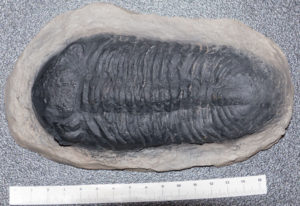 Phylum: Echinodermata
Subphylum: Crinozoa
Class: Crinoidea
Genus: Scyphocrinus
Species: S. elegans
Origin: Morocco
Crinoids are marine animals that make up the class Crinoidea of the echinoderms (phylum Echinodermata). The name comes from the Greek word krinon, “a lily”, and eidos, “form”. The class includes 648 living species and over 5,000 fossil species. Having appeared in the Ordovician, the crinoids have become widespread throughout the Paleozoic period. During the Paleozoic and the Mesozoic they are among the main organisms producing carbonate, constituting the limestone with crinoids or encrinites. Over 5,000 fossil species have been described. Since the end of the Permian, most of the evolutionary lines of the crinoids (subclasses Cladida, Flexibilia, Camerata and Disparida) have been subjected to mass extinction, with the sole exception of the subclass of the Articulata, to which all living species belong currently known.

Class: Chondroichthyes
Order: Lamniformes
Famiglia: Otodontidae
Genus: Carcharodon
Species: C. megalodon
Origin: USA
The Megalodon (Carcharodon megalodon or Carcharocles megalodon Louis Agassiz, 1843) is an extinct species of shark of considerable size, known for its large fossil teeth. The scientific name megalodon derives from the Greek and means precisely “big tooth”. The fossils of C. megalodon are found in sediments from the Miocene to the Pliocene (between 2.3 and 2.6 million years ago). Because of the fragmentary remains, there have been many contradictory estimates of the dimensions for the Megalodon, as they can only be obtained from fossil teeth and vertebrae. Also for this reason, the Great White Shark is at the base of its reconstruction and estimate of the dimensions, since it is considered the best analogue to the Megalodon.

Class: Chondroichthyes
Order: Lamniformes
Family: Lamnidae
Genus: Carcharodon
Species: C. carcharias
The Carcharodon carcharias (Linnaeus, 1758), also called Great White Shark, or sometimes simply White Shark, is the only living representative of the genus Carcharodon, this shark is the largest predator fish on the planet. Protagonist of many movies and documentaries, it is the most known and studied shark species in the world. Usually the average size oscillates between 4 and 6.4 meters, with a weight (for adult specimens) between 680 and 1100 kg. However, his body weight may temporarily increase by hundreds of pounds (even reaching 2 tons), assuming he has just eaten or not. Its maximum length is about 7 meters.

Class: Sauropsida
Order: Saurischia
Family: Dromaeosauridae
Genus: Velociraptor
Species: V. mongoliensis
Velociraptor (meaning “swift seizer” in Latin) is a genus of dromaeosaurid theropod dinosaur that lived approximately 75 to 71 million years ago during the latter part of the Cretaceous Period. Two species are currently recognized, although others have been assigned in the past. The type species is V. mongoliensis; fossils of this species have been discovered in Mongolia. A second species, V. osmolskae, was named in 2008 for skull material from Inner Mongolia, China. Smaller than other dromaeosaurids like Deinonychus and Achillobator, Velociraptor nevertheless shared many of the same anatomical features. It was a bipedal, feathered carnivore with a long tail and an enlarged sickle-shaped claw on each hindfoot, which is thought to have been used to tackle and disembowel prey. Velociraptor can be distinguished from other dromaeosaurids by its long and low skull, with an upturned snout. 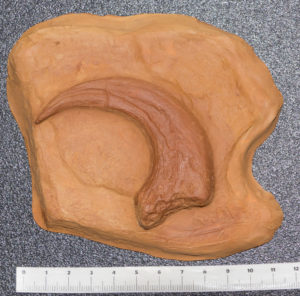 BACK TO MOLDS, MINERALS, FOSSILS, REPLICA and DIORAMAS PAGE